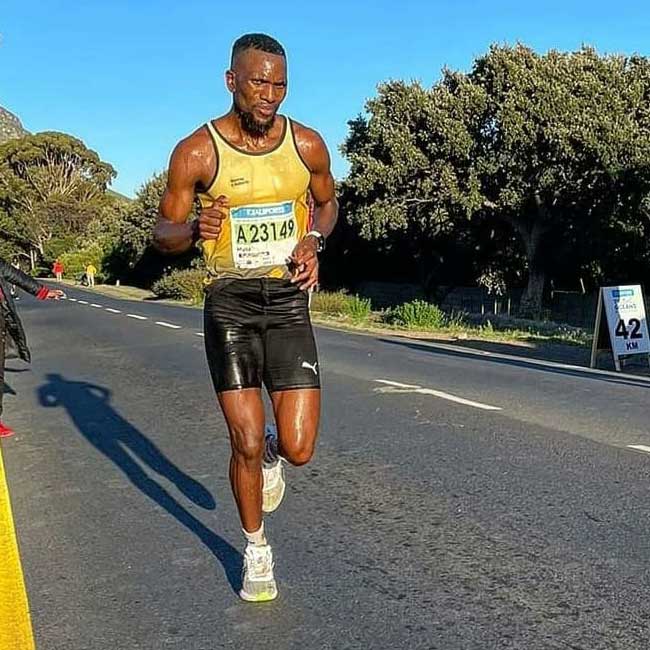 I started running in 2017 as a way of keeping active after I decided to stop playing soccer and to also incorporate cardio training in my weight training schedule. I used to run 2kms every Sunday, which seemed very long at the time. After a few weeks, a friend of mine invited me to a 10km race which I thought I would not be able to complete, I thought it was very long and impossible, but he convinced me. To our surprise I finished the 10km in 46min. After that I decided to challenge myself and run the next longest race which he told me was a 15km, after the 15km I did the 21km and then a marathon all in one year.

My goal was never about times, all I wanted was to challenge myself and finish the distance before cutoff time and I was not doing any running related training at that stage other than weightlifting. Since then, I have completed the Two Oceans marathon 2 times, completed one Comrades Marathon and the longest race I ran being 103km at The Icons Journey Nelson Mandela Marathon where I finished 8th.

Overtime I got convinced by close friends to train as they believed I had a potential to improve my times with training. I have since improved my marathon time from 3h52 in my first ever marathon to 2h38, I improved my Two Oceans marathon from 5h51 to 3h52. I have also been on podium on several races both on road and trail. My goal is to continue to improve my running and inspire other runners that there is nothing impossible when you decide to give your heart and soul into chasing your dream!

HOME | PRODUCTS | BENEFITS | FAQ’S
ABOUT US | AMBASSADORS | CONTACT US